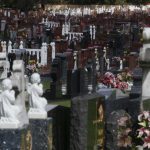 Rookwood Cemetery running out of space, mausoleums the way of the future

HAVE you ever considered being buried in a mausoleum? You should, says Rookwood General Cemeteries Reserve Trust chief executive George Simpson.

The latest funeral music survey found that while the most popular songs played at funerals in 2016 were largely sentimental,

Plan funerals in advance: Save Money

IT IS a topic that most of us wish to avoid until absolutely necessary, but new research shows that only around 18 per cent of Australians plan and pay for a loved one’s funeral in advance.